The version of your browser is too dated for some of our website features.
For the best digital experience possible, take a moment to update your browser now.

The story of us, our predecessors, and how Canberra’s energy came to be.

Along with our predecessors, we’ve been providing local energy since 1915—here’s more about our extensive history and heritage in the nation’s capital.

As Canberrans, we often pride ourselves on the ‘planned’ nature of our city streets and suburbs, and our electricity was no different. The ACT’s electricity network formed the back bone of the city, supporting the steady development of the capital region, into how we know it today.

ActewAGL has proudly grown alongside Canberra. Beyond improving and integrating a safe and reliable energy ecosystem, we are part of the fabric of the territory, committed to giving back year on year to ensure the community continues to thrive.

Our operations are still based in the heart of Canberra and today, we remain one of Canberra’s largest private employers. This means, when you choose local energy, you keep that power in your local community, further supporting the events, people, organisations and businesses that make Canberra such a great place to live.

Here’s a short timeline of an energised history—and it all started at the Kingston Powerhouse.

Now a home for world-class glass creations and great burgers, the Kingston Powerhouse was originally a three-phase power generating system. The Kingston Power Station, as it was known at the time, was the first permanent building in Canberra. Initially, the station transmitted electricity to only Duntroon and Acton, powering Canberra’s first streetlights near Lennox House. With only 1000 ACT residents when construction was complete, the Power Station was working well under its capacity for a number of years, but became the operational hub of the Department of Works and Railways’ electricity supply branch. The site, now heritage listed and a vibrant cultural hub, acts as a powerful reminder of our history in local energy. 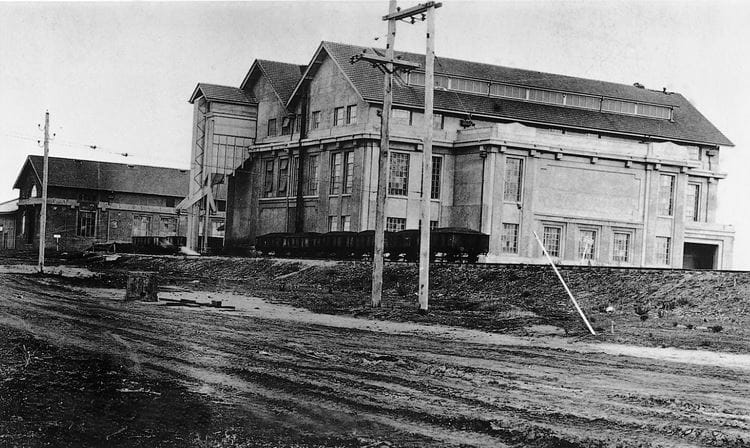 The Kingston Power Station (Courtesy of the National Library of Australia).

In 1921, the Australian Government Department of Works and Railways assumed full control of the Kingston station. By the early 1920s, 92 km of high-tension transmission lines scored our city-to-be. Today, the capital region maintains over 2,394 km of overhead lines and 2,694 km of underground electricity^. This is 55 times the amount of electricity lines that were in place in 1921.

At this time, it was full steam ahead to extend the electricity network—but this was no simple task. Until 1938, horse-drawn pole raisers were used, with each two-metre-deep hole dug by hand. Once constructed, these poles were maintained by linesmen travelling between locations via bicycle. 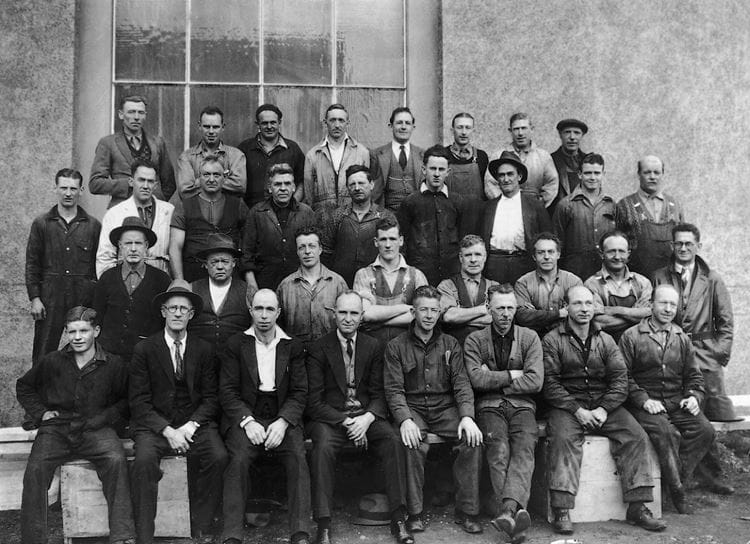 Staff at the Kingston Power Station.

After a slow start due to World War I, Canberra’s population started to grow quickly but was stalled again due to struggles throughout the Depression in late 1929. In the meantime, the Department of Works continued to operate the Canberra electricity network with electrical engineer, A. M. Fraser, at the helm from 1929. A. M. Fraser stayed in this role for over 30 years.

Turbulent times didn’t stop the development of Canberra’s electricity network. In 1930, responsibilities were split. The Federal Capital Territory Branch of the Department of Home Affairs took on electrical services while the Department of Works and Railways took control of water and sewerage.

In 1939, the branch providing electricity services became known as the Canberra Electricity Supply.

Following World War II, a major priority for the Canberra Electricity Supply was the extension of electricity to Canberra’s surrounding rural areas, which at the time, included Weetangera, Gungahlin, Fern Hill and Lanyon.

By 1963, Walter Burley Griffin’s plans for Canberra were almost complete. Residential development was strong and the outer city began to take shape. With the need for further major electrical infrastructure to be built and maintenance of Canberra’s fast-growing suburbs, the Cabinet made the decision that a corporate body be created to manage all things energy for the ACT. On 1 July 1963, the ACT Electricity Authority (ACTEA) officially took control of the electricity distribution network in the ACT. By the end of 1963, ACTEA had also become responsible for designing and constructing Canberra’s streetlights, inspecting all electrical installations, alterations and additions, licensing of electrical contractors and electricians, and managing customer accounts and payments. The first computers within ACTEA were introduced in 1971–72 for this purpose—to replace mechanical accounting machines and more easily process customer payments. 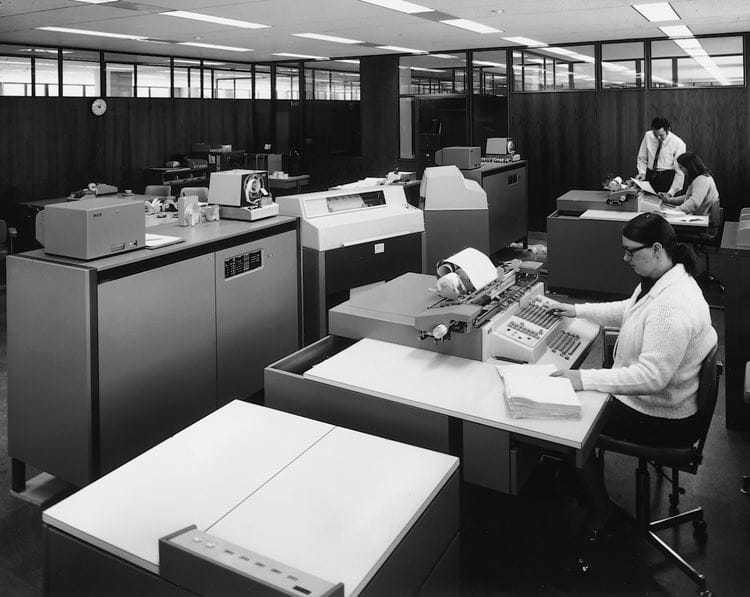 During Australia’s Bicentennial year, ACTEA was reorganised into ACTEWA—the Australian Capital Territory Electricity and Water Authority (most commonly referred to as ACTEW). As a provider of safe, reliable essential services, we have a big responsibility to our local community. From 1989, ACTEW increased commitment to community partnerships and sponsorships. The Canberra Festival, Floriade and the National Science and Technology Centre were among the earliest recipients of ACTEW sponsorship. 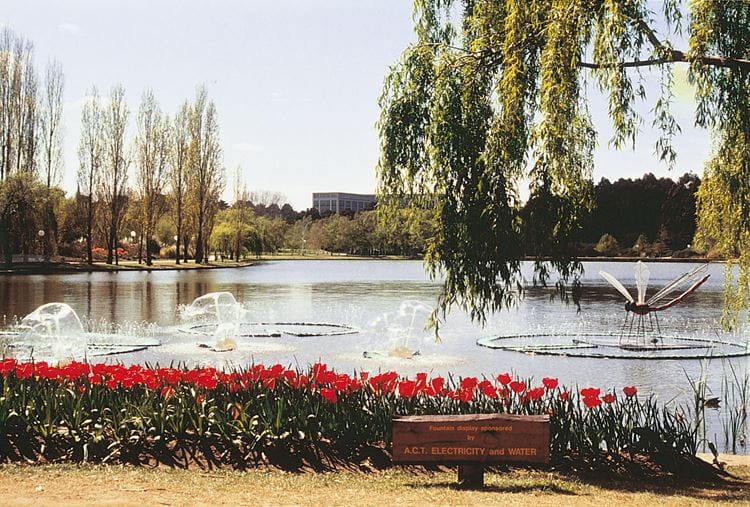 On 1 July 1995, ACTEWA was abolished, and ACTEW Corporation Limited (now Icon Water Limited) was established as a territory-owned corporation, under the Corporations Law. 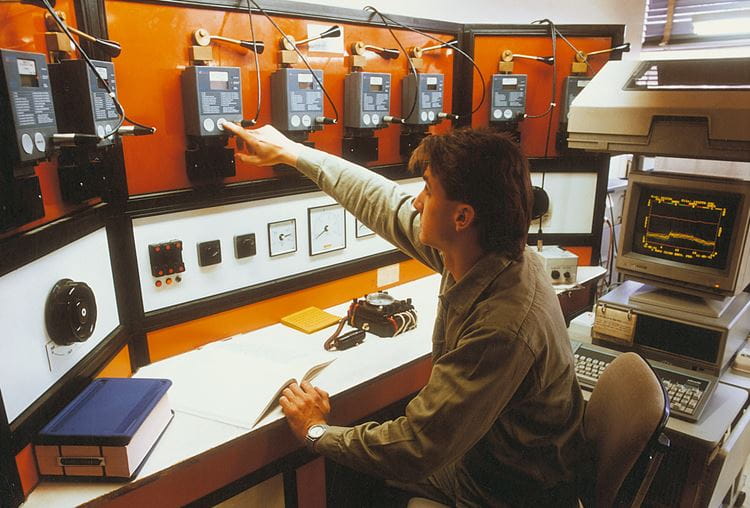 The dawn of the new millennium was a big year. On 3 October 2000, ACTEW Corporation Limited entered into a joint venture with the Australian Gas Light (AGL) company, creating two partnerships: ActewAGL Retail and ActewAGL Distribution. AGL lit the first gas street lamp in Sydney in 1841#, proving a long, proud energy history. This proved to be a powerful union, creating Australia’s first multi-utility public-private partnership, bringing together the management of electricity, water and gas services. The ACT Government decided to retain ownership of water assets only, within Icon Water (then ACTEW Corporation), and outsourced the water operations and maintenance services to ActewAGL.

From 1 January 2018, the part of ActewAGL that operates and maintains our electricity and gas networks, changed its name to Evoenergy due to ring-fencing guidelines set by the Australian Energy Regulator. Evoenergy is the name used by the electricity poles, wires and gas pipes business, and is part of the ActewAGL Distribution partnership. ActewAGL Distribution also includes functions such as corporate services and technical regulatory standards, while ActewAGL Retail continues as the capital region’s local energy retailer—lighting up, heating up, and powering up your day with electricity and natural gas.

We’re still right here, like always. We understand the Canberra community, because we’re from here too, and are available in person, on the phone or online for local experience and expert advice.

Further to being energy experts, we’re committed to partnerships and programs that make an impact in our local community and powering up other people and organisations that do the same. In 2020, we launched our Community Grants Program, supporting 13 organisations to continue or extend their support offerings throughout an uncertain time, and we’re proud to be running the program again in 2021.

See more about our partnerships and community programs.

Expert advice and local knowledge, that’s the power of local energy. See what local means for you and your energy.

Our expert team of locals have put together their tips on how to better manage your energy bills in every season. These are the skills for better bills.

Images are courtesy of ActewAGL and the National Archives.

ActewAGL acknowledges the Traditional Custodians of the Canberra region, the Ngunnawal people. We pay our respects to their Elders—past, present and emerging—and recognise their continuing connections and contributions to this region. We also acknowledge the First Peoples of the broader region in which our footprint extends.

Sitemap
X
We use cookies to improve your experience on our site and show your personalised products and services. To find out more, read our privacy policy.
YES, I ACCEPT